April 14, 2009
I don’t remember much from my physics lessons at school but one concept did take root in my imagination: the idea that energy input equals energy output. According to the First Law of Thermodynamics, energy cannot be created or destroyed, simply transformed from one type …to another“.

So far, so Einstein. Every movement and sound that we make, is generated by energy which has to go somewhere. So the kinetic energy from cycling downhill for instance, translates itself into heat and sound energy - through friction - when the brakes are applied to the wheel rims to slow the bike down.

When you look at the world in terms of energy being all around us, all the time, it’s quickly apparent that our society, which would grind to an apocalyptic halt without electricity, is wasting this supply of abundant everyday power.

The Government has signed up to a binding EU commitment which pledges that 20% of Europe’s energy by 2020 will come from renewable sources. The Department for Business Enterprise and Regulatory Reform recognises the level of challenge this presents, describing it as, “a step change,” which, “will require a ten-fold increase in the level of renewable generation and use in the UK over the next 12 years.” And at the start of December 2008, official government advisors warned in a report that even deeper cuts in emissions might be necessary. With global warming threatening all our futures, the time for us truly to think out of the box is long overdue.

Take the designers of my humble belt. They have fully embraced lateral thinking as a responsible business model. The belt has covered 6,700 miles on London’s streets. Not attached to my waist, holding my trousers up, but in its previous existence as a Bontrager Select, semi-slick, urban bike tyre. It’s a neat bit of recycling - pun intended - and given cyclists’ self-trumpeted environmental tendencies, an astute piece of marketing to boot.

Reinventing the wheel, or at least it’s outer rubber casing, may save a few cows and their hides but it’s not enough to save the world from the ravages of climate change. But maybe cycling does have a role to play in conserving the environment, as it represents a huge untapped reservoir of green, easily accessible energy.

Anyone who’s done a spinning class in the gym will realise that the hefty flywheel on the back of the stationary training cycle can reach a healthy rate of knots. Most spinning machines will even tell you how fast you are turning the pedals - revs per minute - and what your individual power output is. There is a simple technology - the pedal generator - which can convert these revolutions into electricity.

Regrettably, a quick ‘spin’ around the internet reveals that these generators are limited in what they can achieve. Many look like they‘ve been knocked together in some bearded bloke’s garden shed - but not all of them.

The makers of the US, Pedal-a-Watt Stationary Bike Power Generator, as featured on the web, boast how many household items, such as lights, TVs, laptops and desktop PCs can be powered by pedalling. The energy created can be used immediately or crucially, stored in batteries. As a rule of thumb, it says that the 400 watt-hours of power (produced by a single cyclist, on a reading of 200 watts for 2 hours) would run a large screen TV for a couple of hours and a light bulb for four.

Is an afternoon watching the Eastenders Omnibus really worth the exertion involved in pedalling a static bicycle like a lunatic, perched precariously in front of the telly?

It may be taking blue sky thinking too far to suggest that banks of cyclists could be lined up on an industrial scale, in ‘electro-velodromes‘, to generate a significant proportion of the nation’s electricity needs. The UK uses a sobering 358 billion-kilowatt hours of energy in a year. But surely much more effort could be made to harness the readily available power emanating from the thighs of the country’s cycling enthusiasts - who - following GB track domination at the Olympics and the growing trend for two-wheeled commuting - are swelling in numbers by the day.

Dr Steve Beeby of Southampton University has fully embraced the idea of capturing the energy which we generate all around us every time we move a muscle, walk along a pavement or slam a door. He’s working with power harvesters, which operate on the same principle as Trevor Bayliss’s clockwork radio or a self-winding watch, to harness the energy from all sorts of everyday movements.

However when it comes to the potential of the bike, Dr Beeby is sceptical. He calculates that it would take eight cyclists to power a 2kw electric heater and estimates that, “it will require an unfeasibly large number of cyclists,” to run just a single hospital for example. He does sweep one morsel of nourishment from his table when he says, “What would be feasible is for users to recharge their iPods and mobile phones (even laptops) whilst cycling, or at least reduce the running costs of the gym where they are located”.

Gyms are full of unused electricity generators in the shape of running, rowing, weight-lifting and cycling machines - and of course, the gym members who use them. But have any gyms gone down the green energy route? Three of Britain’s biggest leisure groups confess to having no plans to recycle their members’ power, although one, Fitness First, did say they had discussed the subject numerous times.

In Hong Kong it’s different. California Fitness gym has run a test where 13 people charged a battery using cross-training machines. The gym’s chairman at the time, Steve Clinefelter, explained the environmental imperatives behind his project, “One person has the ability of producing 50 watts of electricity per hour when exercising at a moderate pace, which means that to prevent 12 litres of CO2 from being released into the air a person needs to produce the same amount of electricity by exercising on the specially set-up machine for one hour. If a person spends one hour per day running on the machine, he could generate 18.3 kilowatts of electricity and prevent 4,380 litres of CO2 being released per year.”

To get gyms on board the Government could offer incentives to encourage them to hook up their exercise machines to run in-house appliances like TVs, lights and vending machines. UK bike manufacturers should be enticed to favour production of a modern version of the dynamo light, instead of battery operated lamps. And surely there’s more scope for individuals to use their own pedal-power.

I do a twenty mile, each-way, commute to work on my bike. Tapping out a decent cadence on the flat and downhill stretches, I must sit between 150 and 200 watts for much of the ride. What’s to stop me carrying a battery pack which gets charged up as long as I’m turning the cranks?

For inventor Alex Glasden, practical pedal power is already a reality. People might look aghast as he pedals furiously to operate his bright green, washing machine. But he’s making his laundry clean in more ways than one. Others can even buy his Cyclean gadget for around £400. 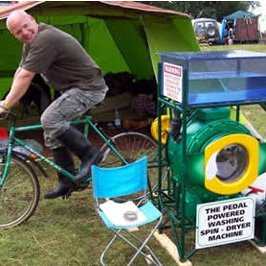 If we’re serious about taking on the challenge of increasing our use of renewable energy - and the small matter of saving the planet - shouldn‘t we all do our bit, no matter how insignificant it may seem?

Reflecting on this notion that, ‘every little helps‘, Steve Beeby points out that, “China‘s building a new coal fired power station every week,” and concludes that, “…the environmental and social benefits could be felt locally but in the grand scheme of things it’s up to Big Brother.“
This means we’re more likely to see forests of new wind farms popping up on the horizon, than massed ranks, of eager cyclists appearing to churn out wattage for the national grid.

Nevertheless, to fight climate change effectively, we also need culture change. Green gyms, pedal-powered home appliances and belts made from bike tyres, should all become so commonplace that they’re no longer seen as oddities. Regardless of the amount of wattage produced, the more we are used to alternative means of generating electricity, the more normal they will become.

If our overall mindset gets ‘greener’, then everyone, including ’Big Brother’, will be much more receptive to increasingly imaginative ideas on how to produce clean, sustainable energy. Let’s all start wiring up our bikes now. Sitting on our hands, or in this case, simply freewheeling passively into oblivion, should not be an option.
Bontrager Cyclean Dr Steve Beeby environment gym power harvester spinning class