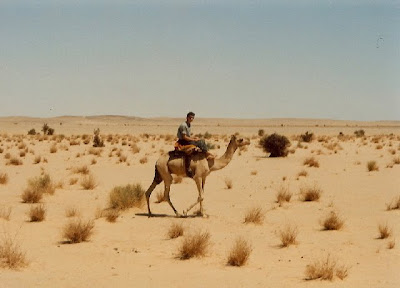 The camel - always better than a bike in the Sahara

Spring IS here finally - and along with the daffs and chirping sparrows, the fair-weather cyclists are back, in their thousands. I for one welcome them. It's been a cold, wet, lonely, winter pedalling through snow, slush and seasonal temperatures.

I managed to negotiate the arctic conditions without disaster apart from one fall in the middle of Richmond Park when my front wheel bobbled out of a rut in the ice and slithered sideways into the frozen pothole at the edge of the concrete path. I was unceremoniously dumped onto the dirty white snow, where blood from my gashed knee marked the scene of my tumble with a bright red, Tarantinoesque, puddle of gore.

Calamity-free it may have been, but winter commuting on two wheels, has also been an often unpleasant ordeal - as usual. Is it my imagination or do car drivers pay less attention to cyclists when the weather turns nasty? It's not as if THEY are being lashed by the rain or buffeted by the wind but they seem to shrink back into their motorised cocoons in these conditions, nevertheless. Many cars give you less room and fail to moderate their speed when the weather's rotten. Listening to the radio with the car heater on - they still seem to be spurred on by the stormy weather, to want to put the foot down and get home as soon as possible. When will someone invent a car heater for a bike?
Coping with the traffic is one thing. Winter causes lots of other problems for those of us who resolutely stay in the saddle throughout the season. Potholes are a well-documented menace and this year, they are worse than ever before. Pinch flats caused by riding unexpectedly over a rogue pothole at full gas are somehow much more infuriating than pucntures inflicted by a sharp foreign object like a thorn or a chip of gravel.
The winter presents more hours of darkness for bike commuters than the rest of the year. A point which makes little difference to me, as a nigh shift worker who regularly cycles through the park well after midnight anyway. But once the nights start drawing in, I've noticed that bike riders who think they need industrial strength lighting, start pulling on the Lycra and venturing out.
I've seen these ludicrously powerful lamps in cycling magazines, costing upwards of two to three hundred pounds. Unless you're pedalling solo across the Sahara or some other inhospitable wilderness - on the surface of Mars perhaps - what is the point? At least three out of every five of my journeys through Richmond Park after dark, is punctuated by a head-on encounter with a cyclist who think's it's acceptable to attach a World War Two-style searchlight to his or her handlebars. To say that I'm totally blinded by them is an understatement. I've taken to growling my disapproval as they speed past. It's ironic that people buy these lights (presumably) with safety in mind, when they are actually highly dangerous. Who knows if any of them hear.
In the city you need lights on your bike in order to be seen, not to see by.
Commuting fair-weather cyclists Lycra pothole Richmond Park Sahara