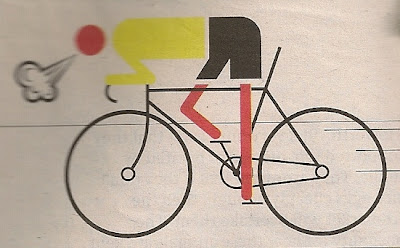 Cycling is a collection of habits and muscle memories learnt in childhood - usually with the help of stabilisers - which are never wholly forgotten. Hence we encourage people to revisit a long-neglected activity with the expression, “It’s just like riding a bike.”

For me, the particular habit of freewheeling, has been second nature for as long as I‘ve been riding. I have also always favoured a conventional multi-geared bicycle. It makes sense on down-hills to click onto the smallest rear cog and blast along like Germany’s troubled big-gear grinder, Jan Ullrich. Choosing a low gear going up and even stooping to the last ditch ‘granny’ option like cadence king, Lance Armstrong, is the other ‘no-brainer‘. Integral to this is the ability to glide along without pedalling.

Why would anyone give up their gears and revert to the kind of primitive, ‘one-speed-fits-all’ machine, used more than a century ago when the Tour de France wasn’t even a gleam in the eye of its first director, Henri Desgrange? He resisted the use of variable gears, fearing it would detract from the heroic efforts of his racers, one of whom, Octave Lapize, branded race officials, ‘assassins’, after dragging himself and his gearless bike over the Pyrenees in 1910.

Nowadays cycling magazines are full of breathless reports on the latest electronic gear shifters. But there’s a growing place too for single-speed bicycles, similar to those of the Desgrange era.

Recently, the sole preserve of city bike messengers, the single speed, fixie and its anti-establishment style is spreading. Courier chic and the ‘fixie’ phenomenon are going mainstream.
Commercial machines are mostly sold with a ‘flip flop’ rear wheel - and two brakes. On one side of the axle is a standard freewheel which still allows you to coast along. Anathema to the fixie hardcore. On the other, flip side, is the true solitary fixed sprocket whose movement is married to that of the wheel.

It’s a cheap proposition. Most ‘prêt à pédaler’ bikes sell for just under, or just over, £500. There’s a growing range from the big manufacturers including Specialized and Trek. Independent companies like Pearson’s of Surrey, Condor and Surly have their own take on the affordable single speed.
If you’re after maximum street ‘cred’ - and have the mechanical know-how - you can take the DIY path, converting your existing bike into a fixie, for one or two hundred pounds.

Since the first rule of the ‘fixie’ is, ‘don’t even think about freewheeling’, adapting is not easy. Try coasting downhill. You’ll end up with your legs twisted into a reef knot.

If you’re worried that ditching multiple gears and repeatedly using a fixed back wheel, could cause knee problems, opinions differ. William Pearson, of Pearson’s, says the key to slowing down is to, “put your legs into neutral”, and use the front brake. Debra Rolfe, Development Officer for Britain’s largest cycling organisation, the CTC, has never encountered anyone with severe knee injuries in her many years as a fixie rider. She thinks, “the claim that riding a fixed gear causes knee problems is a bit of an urban legend”. But CTC, Senior Technical Officer, Chris Juden, urges caution, especially to those with ageing joints. “Pushing too hard on a high a gear”, is a known cause of trouble he says, “riding fixed is not for anyone who has a tendency to knee problems”.

Deciding whether it’s healthy is one thing. Is it legal? The law says bikes should have two brakes, one for each wheel. You’ll see many London couriers escaping through the chinks in jammed up traffic with only one brake lever on their handlebars. The CTC, says there’s no clear definition of how braking systems should operate. So at a pinch, these riders could argue that their front brake, plus the fixed back wheel, actually amount to the required two braking mechanisms.

‘Fixie’ riding is purer, smoother, and more organic, according to the enthusiasts. You have to read the road more carefully and regulate your pedal speed accordingly. Because your legs and the cranks are in perpetual motion, you and the bike feel merged together like a single organism. Just as Irish novelist Flann O’Brien described in his surreal masterpiece, The Third Policeman. Mechanical reliability and low maintenance are the other big pluses.

Going down steep hills is probably best avoided though. The sharper the incline, the faster your short fat hairy legs, to quote Eric Morecambe, will be spinning.

I’m a convert to ‘singledom‘ but for now retain the ability to freewheel. There’s nothing quite as liberating as manoeuvring through rush hour traffic without having to bother about gears. Getting through a gap means pedalling harder - simple. I’m well on the way to shaking off the freewheeling habit altogether. My new fixation with the ‘fixie’ is swiftly turning into a full-blown addiction. 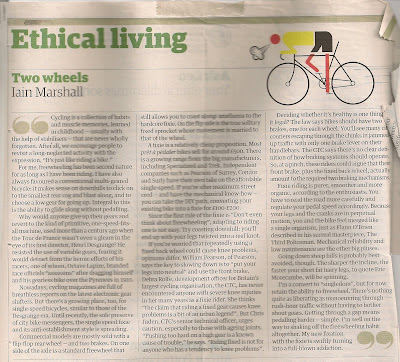 (This first appeared in the Guardian, August 2008: www.guardian.co.uk/lifeandstyle/2008/aug/07/healthandwellbeing.ethicalliving)