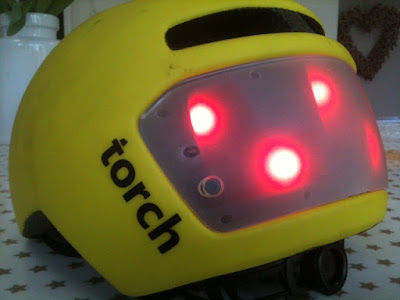 “If only you could see what I’ve seen with your eyes.” This unlikely quote from the sublime eighties sci-fi cult film Blade Runner pops into my head every time I don my new bike helmet before pedalling off into the heart of London. For some reason my futuristic Torch headgear reminds me of the reimagined version of LA which is the setting for Ridley Scott’s superb film. I can easily see myself as one of the extras populating this city whose dominant characteristic is the abundance of neon lights; on buildings, on vehicles and on people’s clothing.

The Torch bike helmet has been a revelation. Several people have commented on it as I’ve pedalled from west London into the city centre on my way to and from work. A taxi driver even pulled up alongside me at some traffic lights – at  five in the morning no less – wound down his window and said he really liked my ‘lid’. I’d been expecting an anti-cyclist tirade.

So what’s all the fuss about? The Torch is a simple yet effective idea, primarily with the cyclist’s safety in mind. The clue to its USP is in its name.

The front and back of the outer shell boast two substantial panels of light – white for the front, red at the back. They are operated individually by small buttons, so you can have the back one lit while the front is switched off or vice versa. As is the norm with more conventional bike lights, they offer a range of modes from steady bright beam to less intense mode and flashing options.

Some reviewers have said the strength of the Torch is insufficient to make the rider stand out in the dark. The number of people who’ve clocked me and  commented on it appears to refute that argument.

I think as part of an overall lighting strategy – I still have my old-style lights attached to my bike frame – the Torch really does help you get noticed whilst riding at night. That can’t be a bad thing. If you want to use them to illuminate the road ahead, you’d be struggling, but that’s not their primary function.

I was worried about the angle my head is at when I’m pedalling – especially on my fixie with its cow horn bars which mean I’m leaning over and forward. Would this leave the front helmet light pointing down at the road, rendering its usefulness redundant? 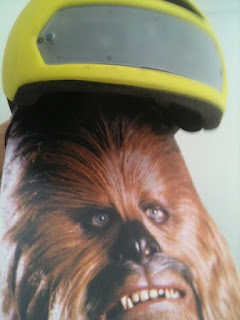 I needn’t have worried. Although my body is crouched over the handlebars, I need to look straight ahead in order not to crash into pedestrians or plunge into potholes, so the light is actually pointing forwards just where you’d want it. This also means the red light at the back of the helmet is positioned correctly too.

The biggest danger from wearing the Torch on those first occasions I used it, was down to my own vanity. Curious to see how it looked on my head, I developed the habit of catching my reflection in shop windows as I sped past. This obviously involved turning my head sideways on the bike. How ironic it would have been to have come a cropper, trying to check out my new piece of safety kit.

It’s elegantly simple. I wouldn’t say there are any down sides – let’s just call them areas where there’s room for improvement. The chin strap is one. It feels insubstantial and mine constantly loosens as I ride. It’s the first helmet I’ve had where readjusting the strap is necessary before every ride.

If I really wanted to get pernickety, I’d also mention the charging cable. It is relatively short which can be awkward. The helmet is charged (back and front) via a USB cable which has two plugs – one for the front and one for the back. A few more centimetres on the cable would mean I didn’t have to balance the helmet precariously on top of my computer’s base station at work for instance. But this is being very picky.

Another aspect of the helmet’s power regime which could be better relates to the charge. I’m not aware of ay mechanism which warns you that the batteries are about to give up the ghost and consequently the helmet lights just stop working all of a sudden. A small warning light or other system might help. Having said that if you use the helmet regularly for commuting as I do, you soon work out how long the charge is going to last and I pre-emptively recharge to ensure I’m never caught out.

These are minor gripes. The Torch is a great addition to any urban rider’s kit collection. It serves a vital purpose and gives me – a seasoned city bike commuter for well over two decades - extra peace of mind. And as I’ve found out, it’s a great facilitator of unsolicited conversations with random motorists and pedestrians alike. So if you fancy a chat waiting for the lights to turn green, I’m the one who’s just pedalled up to the junction with my head swivelled sideways as I admire my reflection in shop windows, no doubt pretending I’m a character in Blade Runner. 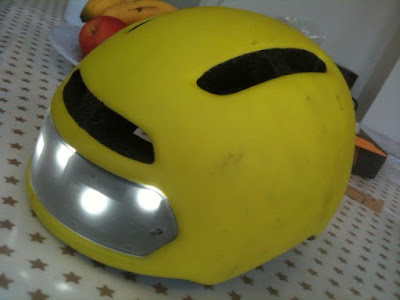