DO JUDGE THIS BOOK BY ITS COVER 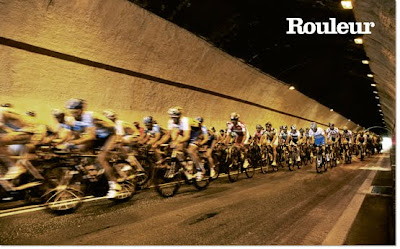 The cover photograph was taken by Taz Darling
It's long been a matter of regret that I can't afford to buy any of Rapha's luxurious cycling attire.There's no doubt that their merino wool jerseys and other evocative retro riding kit are top quality - but they also come with top quality price tags which frankly, are out of my range.

But this year I've pushed the boat out after a fashion and purchased some cycling-related Rapha merchandise, in spite of myself. And, I have not been disappointed. It may not be wearable, it may not wick sweat or repel rain showers, but the special Tour de France edition of 'Rouleur' - the publication co-produced by Rapha - is a reading experience akin to wearing real animal fur next to bare skin. And apparently that's a good thing! 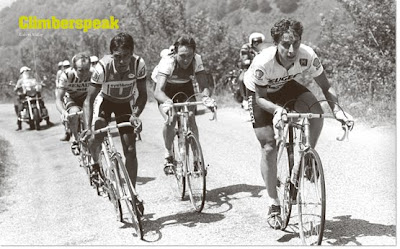 The surprise literary revelation of this edition - the writer who broke away from the bunch and stayed up the road with every pen stroke - was none other than reclusive, Scottish, King of the Mountains winner, Robert Millar. I've read the execellent Richard Moore biography of Millar but maybe the old grimpeur should have penned his own autobiography and saved Moore the trouble. His piece in Rouler certainly demonstrates a facility for writing. In his essay, Climberspeak, Millar gives us a passionate and fascinating climber's eye view of riding the Tour.
It's col in the mind... 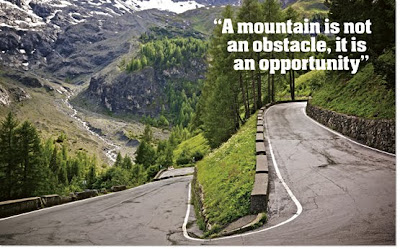 He examines the internal landscape of the cyclist's head, as well considering the physical contours of the Alps and Pyrenees which are pedalled over. The 1984 Polka Dot Jersey holder describes every conceivable scenario a rider might find himself in, when the road goes upwards. Is he riding in support of a team leader? Or is he toiling up the hill with the KOM prize in his sights? Throughout Millar's critique is the idea of the climber as, an outsider, an individualist, an adventurer, a romantic, an entertainer and an artist. Millar believes that climbing mountains has, "...always been more about feeling and sensations than doing as you are told by an electronic device or a know-it-all at the side of the road." It's the ultimate depiction of the climber as a swashbuckling hero on two wheels. 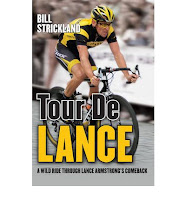 Of course Mr Millar's engrossing article is just one of the many delights on offer here. Bill Strickland has written a compelling love letter to the Tour de France. Much of it, excerpted from his book about Lance Armstrong's 2009 comeback.
Strickland takes us away from the peleton's big names, the team buses and high-powered hoopla. Instead he looks towards the roadsides, peopled by the patient punters, waiting for 30 seconds worth of Lycra to zing past them. Reading Strickland 's description of the approaching peleton, took me back to Hyde Park in 2007 and Mur de Bretagne in 2008. We stood in the rain under a tiny umbrella for three hours that day in Brittany, waiting for our first glimpse of Sylvain Chavanel and Tommy Voeckler speeding up the main street. Their arrival - as ever on Tour stages - was heralded by the buzzing helicopters in the distance which gradually got closer and closer. 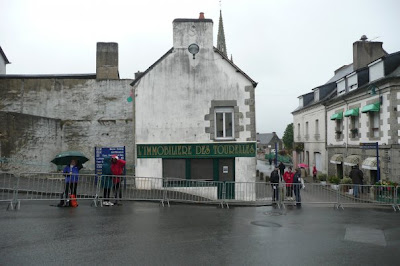 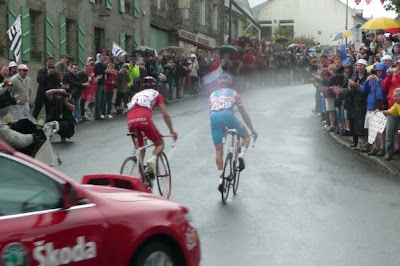 Strickland captures a similar scene brilliantly, from Stage 17 of the 2009 Tour. He's standing near the top of the Col de la Colombiere observing that, "Madness was upon this mountain: the helicopters that first came into view far below as hornets swarming the skinny roads had now risen to eye level like special effects in a war movie as the race had continued ascending beneath them. Now they hovered directly overhead, roaring and swatting air down upon us. Far down the mountain, I could see the crowd clotting the road until forced to scatter by an assault of sirens, lights and horns. But even then, the fans stood thick and close, leaning into the path wedged open by the vehicles. A great bawl travelled up through the crowd as if we were nothing but a telephone line laid there to communicate the race's excitement. We began shouting in our turn as the racers came." Wow! Rereading that still gives me goose bumps. 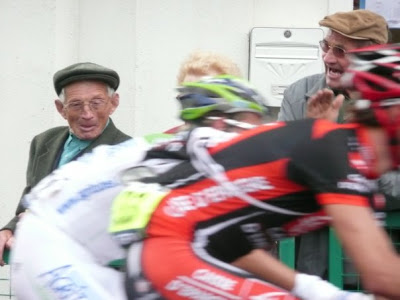 Strickland is a well established cycling journalist who's written numerous books and edits Bicycling magazine. He's joined in the pages of Rouleur by many familiar names including, Graeme Fife, William Fotheringham and Matt Seaton. There are light-hearted pieces profiling the main cycling types such as the grimpeur, rouleur, sprinteur and baroudeur - all accompanied by exquisite Jo Burt sketches. One of these - rouleur - is authored by punk rock impressario turned cycling hack, Johnny Green. More substantial articles shine a light on the life of a Garmin Transitions team mechanic. There's a directory of some of the Tour's fiercest climbs, a piece on the gendarmes who police the world's greatest sporting event and Rouleur's Deputy Editor, Ian Cleverly, spends time learning the secrets of being a soigneur. 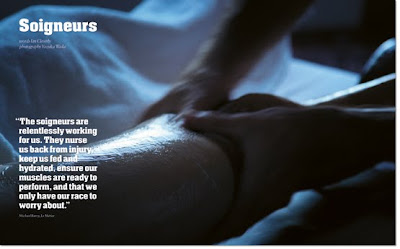 One last literary gem deserves a specific mention here. Herbie Sykes has written an intimate account of road racing's difficult birth in the UK, in 1942. The focus of his piece is, Ian Steel, who, as a boy in war time Scotland, became intoxicated with the galmourous world of European cycling. The Glasgwegian - who once took a job as a butcher's errand boy, because of the cycling opportunities the role presented - became Scottish champion and won the 1951 Tour of Britain (sponsored at the time by the Daily Express). Then he was invited to take part in the two week long, Peace Race - a highly politicised event cobbled together by Poland and Czechoslovakia in the post war years when the Soviet bloc was still taking shape. Steel - now 81 - triumphed in the 1952 edition of the race and recounts his exploits to Sykes. He took control of the GC on a mountain stage gaining a lead of nine minutes over his nearest rival - Jan Vesely, Eastern Europe's "greatest cyclist". Steel was crowned winner in Prague's Strahov Stadium, watched by a crowd of 220,000. The Peace Race may have been a massive deal in eastern Europe, but in the UK it was completely off the radar. Sykes notes that, "With the exception of the communist Daily Worker, the British press completley ignored the event... Cycling magazine... ...wrote precisely twelve words about the greatest achievement in the history of British bike racing." Nevertheless, Sykes hails Ian Steel as the man who, "invented British cycling."

Needless to say, this magazine feels more like a coffee table book than a throwaway mag. Rapha's clothing puts a premium on quality, so too does Rouleur. It's printed on heavy art-stock paper and thoughtfully set out, filled with evocative images of cycling; portrayed as high culture, rather than gritty sport. I'd love to urge you to grab a back issue of this edition as soon as you can - sadly, as the Rouleur website confirms, their Tour Special is "sold out".
Alps Bill Strickland grimpeur Hyde Park King of the Mountains Lance Armstrong Mur de bretagne Polka Dot Jersey Pyrenees Rapha Richard Moore Robert Millar Rouleur